The Multi-Pack™ utilizes time-honored flat parallel plates set at a steep 55 degree angle. The smooth flat plates in a cross-flow design help make this the most non-fouling design industry has to offer. Plate gaps can be tighter with less plugging than traditional coalescer plate designs.

The smooth flat parallel plates are set at a 55° angle from the horizontal. The coalescer plates set at this steep angle help keep the solids moving downward and off the plates. This steep plate angle helps ensure that solids are processed down and out of the coalescer. [While oils and grease, in the same manner, can move upward and off the underside of the plates to be processed up and out of the coalescer.] Our smooth, flat-plate design has no “nooks and crannies” in which solids and sludge can be caught to prematurely foul the coalescer.

Other Designs: Other designs have much higher Equivalent Diameters due to the longer plate widths and wider plate gaps. Further, the corrugations in the plates of other designs also increase the actual turbulence within their coalescers. Other coalescers have Reynolds numbers that may range from 500-2000.

In most of Mercer’s models (units over 30 gpm) the short plate widths have an inherent “herring-bone plate design” built into the coalescer. It is this herring-bone design that help produce the dedicated Chimney-Zone™ feature that is crucial for the removal of solids.

While many coalescers employ a counter-current flow of liquids and solids, Mercer utilizes a cross-flow design to combat fouling. This feature becomes increasingly important as plate gaps decrease. The Multi-Pack design allows both oil and solids to move in the direction of the flow, minimizing the counter-currents and turbulence that cause solids fouling and oil re-emulsification. 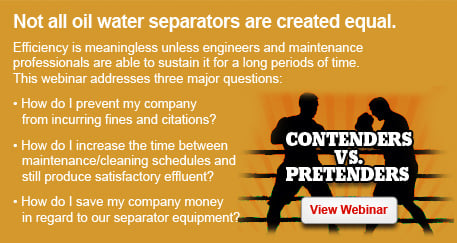 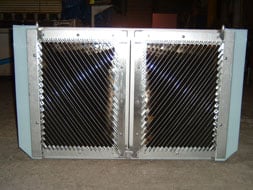